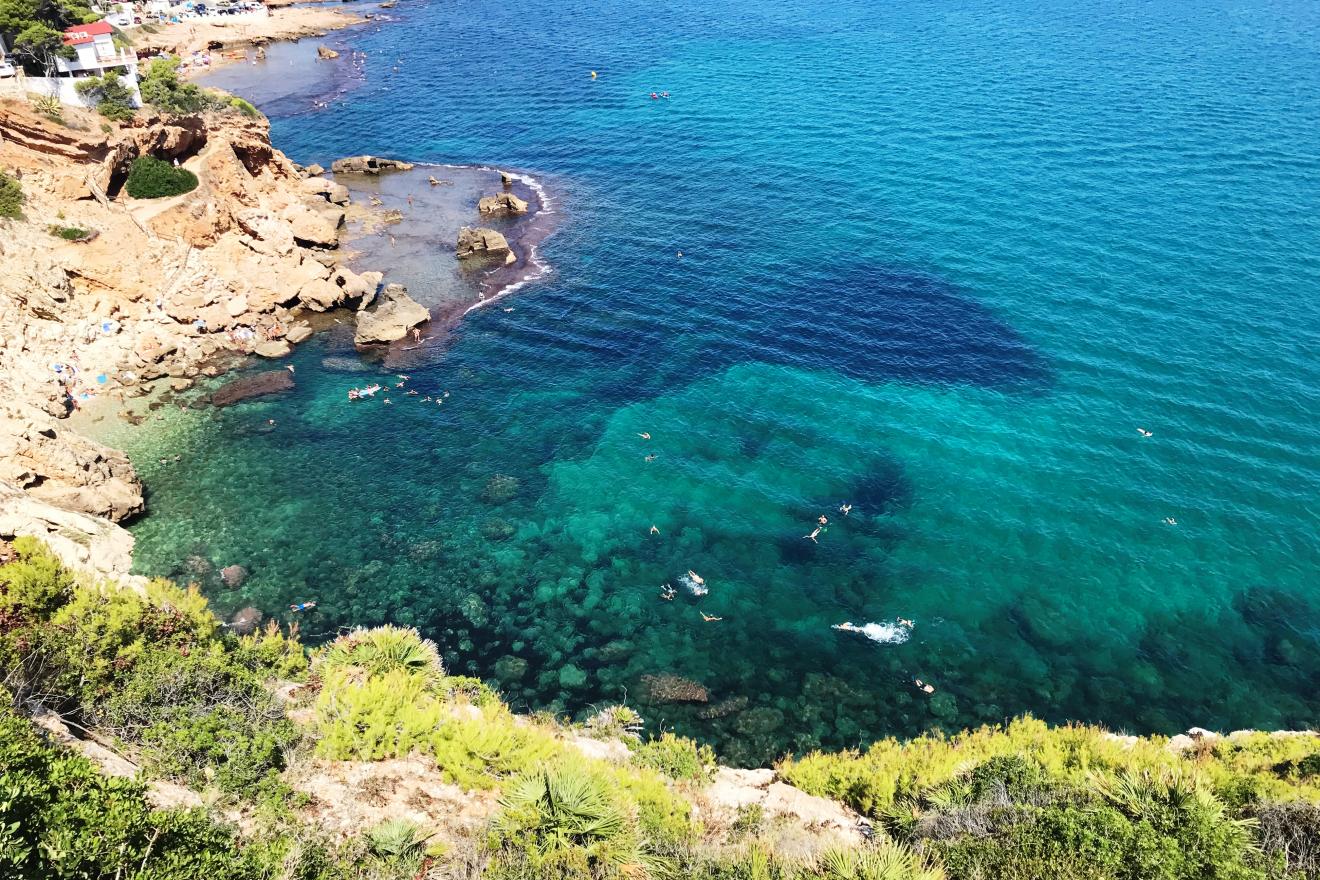 A cave surrounded by crystal clear water, right on the shore of Javea’s rocky coast. The Cova Tallada once was man-made to gain material for construction; nowadays the cave is a popular tourist destination. Costa de Valencia’s students didn’t want to miss this fabulous experience. Saturday morning the students and their companions hit the road to Javea.

The students gathered as a group to take the bus to Denia, from where it’s easiest to get to the cave.  I took us less than an hour to arrive at the hiking trail’s start point. From there we hiked for half an hour along the rocky coast towards the Cova Tallada. During the entire hike we had a great view of the Mediterranean Sea – the open water was colored dark blue, but cleared up the closer it got to Javea’s coast. Some stages of the trail were harder to pass than others, this made hiking more fun.

As we arrived at our destination, we explored the Cova Tallada. The cave consists of different spaces and the sea water swashed into the lower one. We left our stuff in the cave and went for a swim in the crystal clear water. The sea was wonderfully refreshing after the hike! Leaving the cave, the water became deeper and deeper. Some students brought diving goggles, so they could discover the exciting underwater world and several species of fish. After a swim we relaxed at the cave’s rocks, ate our provision and enjoyed the sun. Then we headed back along the coast.

When we arrived at the trail’s starting point again, the students had some spare time. Some of them ate delicious Tapas at a restaurant or drank a soft drink in a bar and others went swimming again in the proximate cove. Around half past 5 we went to a viewpoint with lighthouse. From there we had a breathtaking view of the Mediterranean Sea and Javea.

The city of Javea was our next stop. As every year in the end of August, Javea was holding festivities, which are known for their special kind of bull fighting: Bous a la Mar. The spectacle takes place at the city’s port. Citizens try to provoke the bull before jumping into the basin with the intention of making the bull jump into the water too. In case the bull jumps, of course he’ll be brought on shore by a boat again.

When we arrived there, the showplace was already set and the thrilling spectacle began soon. Some bulls actually jumped into the water, while others turned out to be clever and made everybody else jump without passing the port’s border. Besides the bull fighting, there were also delicious Tapas of fresh fish and shell food sold at the port.

After an exciting day with varied program, the students were tired. Around 10 o’clock we returned to Valencia with lots of new experiences and memories.