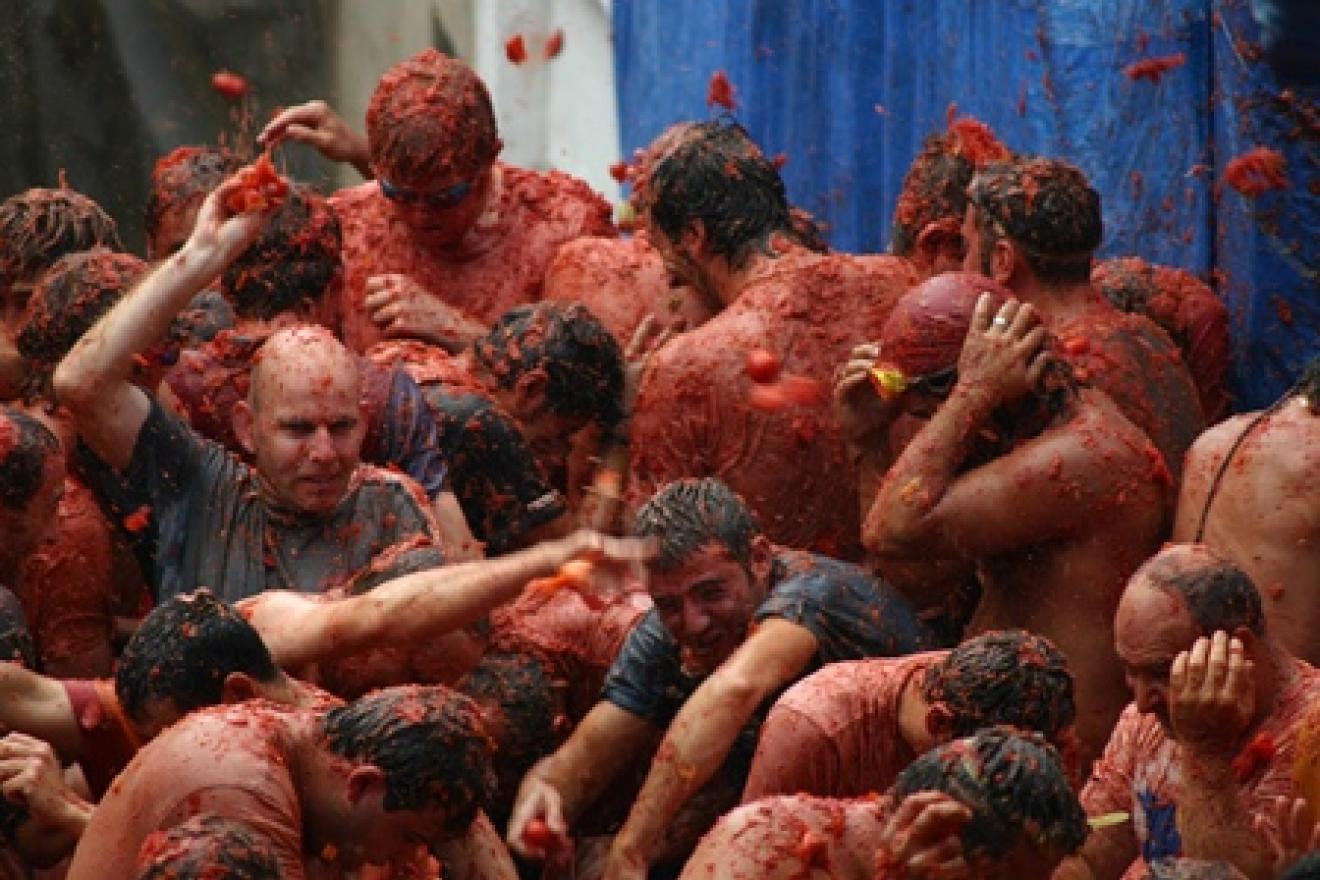 Every year on the last Wednesday of August, Buñol (a traditional villige in Spain’s region Valencia) is thrown upside down: The residents celebrate the hilarious Tomatina festival throwing tomatoes at each other. Exactly where this tradition has come from is not quite clear. It was probably found in a spontaneous act and has been pursued as a comical tradition. People from all over the world travel to Buñol to participate the tomato fight. So did Costa de Valencia’s language students visit the Tomatina and join the spectacle.

Early we took the bus to Buñol and in approximately 45 minutes we arrived. At 8 o’clock in the morning there were positive vibes flooding the small village already. People were out on the streets, drinking, chatting and dancing and we too began this exciting day with fiesta. We had the traditional Tomatina-brunch; a sandwich with tomato sauce and sausages, and indulged in some sangria and beer. Afterwards, we went to the center to determine a meeting point to ensure we all found one another after the tomato fight.

Then we walked to the Tomatina-zone where the tomato fight would be held, and entered the fray! Although the tomatoes haven’t been distributed yet, the spectacle was already in full swing. At 11 o’clock the starting shot of Tomatina was fired. Six trucks passed through the streets, which were full of cheerful people, and occupants threw squeezed overripe tomatoes on the crowd. As soon as the first truck passed, the tomato fight started and tomatoes flew all across the streets. Enthusiastically, we threw the squeezed tomatoes at each other. Some people wore goggles or diving masks, but it didn’t really change the fact that after a few minutes we were all covered with tomato paste and even the streets started filling up with the red sauce. The tomato fight was hilarious and we laughed a lot. After an hour the spectacle was officially finished. We went to the village’s river to wash of the tomato paste of our body and our clothes. Some gentle residents offered a shower with the garden hose and the clothes dried quickly in the sun.

After a while, we all reunited at the meeting point. Here we continued the fiesta with good music, fresh drinks and a cheerful atmosphere. Later that afternoon we returned to the place where we had brunch to regain our strengths – the sun and the excitement was draining. We recovered eating some more sandwiches and drinking some fresh beverages. The end of the day we enjoyed being together and telling stories about the day. Around 6 o’clock we returned to Valencia; exhausted, but also happy with the unique and unforgettable adventure we’ve experienced.